I LOVE YOUR PRODUCT!

I have used Certo ever since I started making jams and jellies when I first attended the University of Waterloo, Ontario, in the late seventies. I moved back to England, home of my birth, in 1984 and got back to jamming in early 1992 as, after I had my second son , I had time and cute little baby food jars on my hands. Glass recycling was then a thing of the future. I bought a book on preserving for 25 pence- 50 cents at the time, costed the ingredients and started by making Seville marmalade, with Certo, of course! My marmalade became a real favourite with friends and family. I progressed onto strawberry and blackberry jam with fruit picked from farms and hedgerows and again shared the results of my efforts. Soon I became inundated with lovely, clean jars delivered by smiling pals who hoped to have one or two returned full.

I have made thousands of jars of jam, jelly and especially marmalade over the years- always using Certo and your recipes because the results are consistently excellent. Now I have a small Bed and Breakfast business at home and guests love my homemade preserves, especially my marmalade. Overseas guests often buy a jar or two to take back as a memento of their travels. I, and you, should take that as a real compliment. When asked, I always tell people I use Certo.

I write this now as a batch of apricot jam is cooling, waiting to be bottled and put in the cupboard with the 22 lbs. of strawberry jam I made earlier this week and the 18 litres, yes litres, of marmalade I made in January. (I ran out of marmalade last November and was not going to let that happen again.)

If you could send a loyal customer any coupons or vouchers, that would be lovely, but I wanted to let you know how much I valued your product.

Thank you to Joanna for this amazing poem!

Certo pectin is one of a kind
The likes of which are hard to find
Not for me the cheap imitation
I like quality on every occasion!

Certo Pectin makes your jam set
Oh how clever – no failures yet!
No need to shout, no need to exclaim
Certo is awesome – remember the name!

Sales of liquid pectin – the gelling agent in fruit jam – are massively up, with manufacturers pointing to Paddington bear as inspiring a homemade marmalade movement. 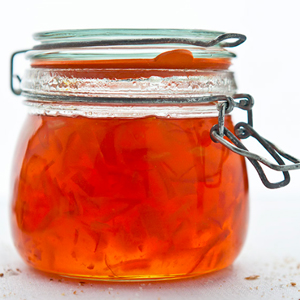 Got lots of fruit? Search for a recipe: